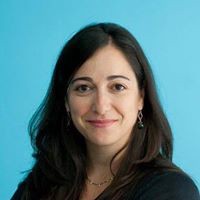 Lisa Colton, Founder and President
Lisa Colton holds a B.A. from Stanford University, and studied in Israel for 2 years at the Pardes Institute of Jewish Studies, Livnot U’lehibanot and the Yakar Learning Community, among others. Lisa’s work experience combines education, technology, community building and a deep passion for Jewish life and wisdom.  In addition to her work with Darim, Lisa has served as a board members and president of the board of the University of Vermont Hillel, a board member of the Coalition for the Advancement of Jewish Education (CAJE), as a past president and board member of The Local Food Hub, board member of the Peabody School, and the co-chair of the Early Childhood Education committee of her synagogue.  She is currently on the board of BimBam and Seattle Country Day School.  Lisa is the recipient of the Hillel “Exemplar of Excellence” Award, the Jewish Communal Service Association of North America’s “Young Professionals” Award, and the Nonprofit Technology Network’s NTEN-y Award.  She lives in Seattle with her husband, 2 kids, their dog and four chickens. She’s also the Chief Learning Officer of See3 Communications.

Darim draws regularly on a deep bench of amazing experts to add capacity, depth and wisdom to our work.  We are thankful for the brilliance of our collaborators who make up the Darim family.

Rabbi Neal Schuster is a Senior Jewish Educator at KU Hillel. He was previously the Assistant Rabbi at Congregation B’nai Jehudah in Overland Park, Kansas. A graduate of Hebrew Union College, Neal holds MA’s in Jewish Education and Hebrew Letters in addition to his Rabbinic Ordination. Neal has worked with the Berit Mila Program of Reform Judaism, including a term as Director and as Executive Director of the National Organization of American Mohalim. Before ordination he was Program Director for the Westside Jewish Community Center in LA, Director for the Northwest Regions of the North American Federation of Temple Youth (NFTY), and as an Israel Program Director NFTY. Neal has extensive experience in Jewish education, youth groups and camps. He is a member of the Central Conference of American Rabbis, the National Association of Temple Educations and is co-chair of the Berit Mila Board of Reform Judaism.

Matthew Grossman is the Executive Director of BBYO, which is known as the largest and most effective provider of identity-building and leadership development programs for Jewish teens. In this capacity, he is BBYO’s chief professional officer responsible for working with the organization’s lay and professional leaders in setting a vision and implementation strategies for the BBYO movement, which includes 18,000 teens, 250,000 alumni, 130 employees and 800 volunteers. Prior to BBYO, Matt worked for Hillel: The Foundation for Jewish Campus Life, playing a key role in the organization’s decade-long renaissance. Matt lives with his wife Melissa in Falls Church, VA.

Sally Narodick has served as CEO for Edmark Corporation, and Apex Learning, two educational software companies. Retired from these, she has continued to work as a consultant to the educational technology industry and serves on the boards of directors of five publicly held companies. Earlier, Sally worked with Seafirst Corporation (now Bank of America) in a variety of financial management capacities, including Senior Vice President and Corporate Controller and Senior Vice President for Business Banking in Western Washington. Sally has a MA from Columbia University and a MBA , with distinction, from New York University. She is very active in the Jewish community in Seattle and serves on the Boards of Temple de Hirsch Sinai and many other Jewish organizations. She is past Chair of the Greater Seattle Chamber of Commerce, United Way of King County, and is active as a leader in other civic organizations. Sally is married and the mother of two children.

Brian Cohen is the Executive Director of Columbia/Barnard Hillel.  Brian was previously the Assistant Director at the Hillel of Binghamton and then the Executive Director of the University of Virginia Hillel where he revitalized/rejuvenated a declining institution into a place that continues to thrive years later.  Brian has most recently acted as Director of Campus Services for Hillel on the national level, acting as an advisor/consultant to over 30 Hillels, specializing in fundraising, board development, University relations, and financial management.

Please join us in supporting the @Wikimedia Foundation to keep @Wikipedia a free, thriving and accessible knowledge tool for the world. It relies on millions of small $ donations. https://donate.wikimedia.org Use it? Support it.