Any Sex and the City fans out there? Me – guilty as charged. Skip down to the paragraph that begins with in talking to if youd prefer to avoid the fabulousness thats about to ensue…

The following clip does an especially great job of illustrating a point Ive been thinking about a lot lately. (Be forewarned there is some naughty language sprinkled here and there.)

Carrie, the shows witty protagonist, has just been broken up with by a depressingly lovable fellow writer, Berger. But shes not so much upset about the break-up as she is bewildered at the medium through which the break-up message was conveyed: that most ubiquitous of office supplies, the Post-It. Its clear to the stylish gaggle of ladies who lunch that the message and its delivery do not line up.

In talking to both individuals and groups about social media, many colleagues and I tend to stress that its just a tool. At the same time, we all know full well that social media is much more than that.

Heres an analogy; lets talk about food. Here in the U.S., eating is primarily done with forks and knives. Those are our tools and we dont think too much about it. But what happens when those tools are traded out for a row of six different forks, or a pair of chopsticks, or a communal piece of flat bread? The cultural implications of the tools with which we eat are suddenly brought to the forefront. 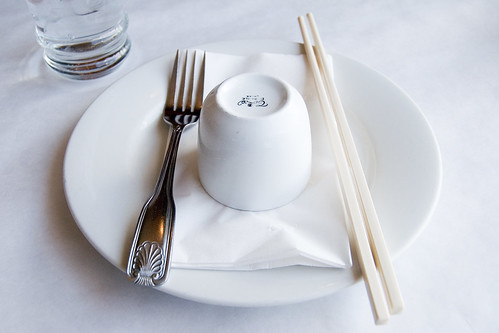 Change the tool, and (to some extent) you change the culture. Or, similarly, to quote Marshall McLuhan, the medium is the message.

To touch briefly back on the aforementioned saga, Carrie later goes on a rant about how a break-up should ideally be handled. She stresses that the message of ending a relationship should be delivered in a way that honors what the two people had together. Essentially, the message and the medium should match.

Im confident everyone reading this post has had moments like this – moments in which weve questioned what is appropriate to share (or find out) via Facebook, or over email, or in a text. The screenshot below illustrates a very mild example.

And its not only due to issues of public vs. private in these spaces, but something deeper. Theres something about posting certain messages on Twitter, for instance, that feels like the digital equivalent of breaking up on a Post-It. But these media are all developing so quickly, becoming so deeply ingrained into our lives and even onto our physical selves, thats its often unclear how to draw these boundaries. Or whether it is a fools errand to try to do so.*

How can an organization keep up and be successful in this environment? Ill give you my thoughts on this in a follow-up post. But now, Id love to hear yours. Have you ever had a Post-It moment? What are your impressions of the relationship between the medium and the message? What are the implications for Jewish organizations in the connected age?

*To further complicate the matter, social media is not some monolithic beast. The term refers to a field, a loose configuration of platforms and spaces that allow for certain kinds of interaction. Each space has developed a culture of its own. There are behavioral and conversational norms that are perfectly acceptable in one space that would seem quite odd in another. For instance, sharing pictures of your breakfast has become fairly acceptable on Facebook; doing so in LinkedIn may not go over so well. (But now Ive gone off about food again…)