In the coming days and weeks we’ll be sharing 10 things you should have on your radar screen for 2010. If you’re already on top of them – mazel tov. Share with us what you’re doing in the comments. If not, time to get hip to the new decade. Don’t put it off. This isn’t the future, it’s the present, so pay attention.

To kick us off, mobile mobile mobile. Everybody’s got a phone in their pocket, and increasingly it’s a pretty intelligent one. The iPhone, Blackberry, Android and others are taking over the market, and shaking up the status quo. Assume that people are looking for and engaging with you while on the go, not just while sitting at their desk.

Some things to know:

http://mobileactive.org/ is a great org with useful resources and a discussion list on how nonprofits are using mobile in their work.

http://www.mobilecommons.com/ offers services for marketing, advocacy and fundraising via mobile (and thanks to Mobile Commons for donating their services for our Boot Camps)

http://www.mobilecitizen.org/ has excellent resources for mobile use in education and nonprofits.

Great resources from Wild Apricot: Is Your Nonprofit Website Mobile-Friendly?

What would Eliezer Ben Yehuda Tweet? Well, from what we know of the eccentric father of modern Hebrew, he probably would have found the technology (let alone the prospect of naming it) overwhelming. But that doesn’t mean we have to…

The latest initiative from NJOP (National Jewish Outreach Project) is a Hebrew literacy initiative, with Twitter and social media as its hook.

The project is an outgrowth of NJOPs popular Read Hebrew America program, said NJOP publicist Ilya Welfeld, founded with the idea of reaching people who arent inclined to join a community class the Jewish Tweets social media brand was a perfect background, providing a little kitsch and allowing people to learn Hebrew in bite-sized pieces.

Right away, almost 200 people officially registered, Welfeld said, noting that these are just the people who proactively want to be receiving everything directly to them. But on a daily basis, several hundred people are participating however theywant. The intent was to create learning that was atyour own pace, in your own space.

TwebrewSchoolprovides three free learning options: Tweetups, video lessons, and newsletter signup; and if you already know Hebrew, you cansign up to be a Twebrew School teacher . Check out your Twebrew twoptions at this twebsite http://www.twebrewschool.org.

Have you joined the ranks of Twebrew School teachers? Do you know someone who’s using NJOP’s Twebrew School program in their local community? Share your experiences and feedback with us here.

Haven’t seen the Twebrew School videos yet? Begin your education with Lessons 1 & 2.

This post is an expanded version of the original, which appeared on Esther’s blog, My Urban Kvetch.

The URJ is promoting an online dictionary that’s part of their Chai Curriculum. While it’s pretty simple, and not terribly extensive (maybe I should say “there’s room to grow”), it’s a very useful tool for those learning Hebrew, or wanting to brush up before the High Holy Days or for any other reason. 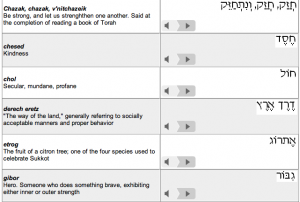 Broken into 7 levels, words are listed in alphabetical order (in transliteration – which is exactly the way to do it for the intended audience). It offers the Hebrew spelling with vowels, the translation and… audio! Furthermore, there are notes in some entries about where the word or phrase is found, or contextually used, which is really helpful.

The one thing I wish they included was a search function. For users who have a word in mind but aren’t using this tool specifically with the Chai Curriculum materials, one might need to toggle through the seven levels to a) find the word, or b) determine that it’s not even on the list.

I’ve also found a number of Jewish organizations who employ non-Jews who need a Hebrew tutorial here and there, and interfaith couples where the non-Jewish (or not raised Jewish) spouse is seeking clarification of something. Not to mention the very-common (and exciting, I’ll add) moment when kids come home from Hebrew school knowing something their parents don’t! And I’m sure there are many other uses. How might you use this online audio dictionary? What do you think could make it even more useful?