Turns out Birthright Israel NEXT isnt the only Jewish organization with an iPhone app. In addition to BRI NEXTs Mila4Phone, there are hundreds of other Jewish apps available through the iTunes store. Some of them are Torah related, others are related to Shabbat, prayer, Kashruth, or learning.

One organization that is leading this trend in the Jewish community is the Jewish Community Federation of Cleveland. Its app, Jewish CLE, features a community calendar, interactive maps, a community director and links to the Federations YouTube channel, twitter feed and event photos.

JewPoint0 caught up Steph Dlugon, director product marketing of iNomadics, creator of Jewish CLE, to learn more about how the app came together. 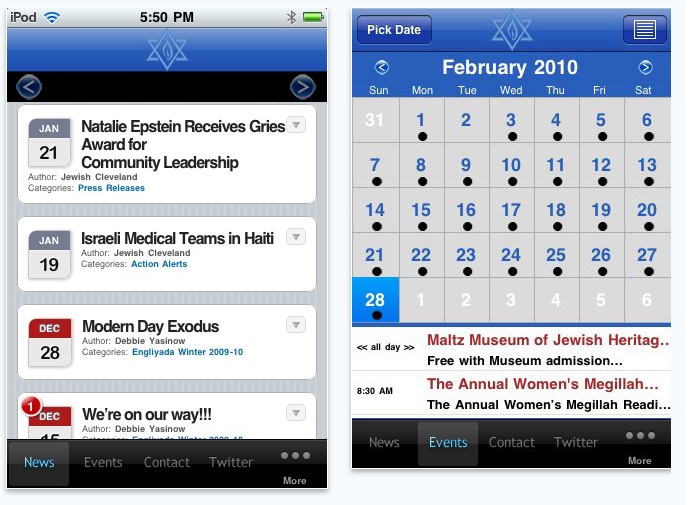 How did Jewish CLE come to be?

About a year ago, iNomadics had this idea about creating apps for places like nonprofits, and community and arts organizations. Because nonprofits always have events or time sensitive information that they need to get out to their constituents, we felt they needed to develop a mobile presence. We approached the Jewish Federation of Cleveland with the idea of developing an app. The Cleveland Federation thought it was a good idea and we started working with the people there to figure out what their needs would be and to develop the best features. A year ago was early on for nonprofit organizations to be thinking about the mobile web. One of our challenges was to find a forward-thinking group that saw the benefit of a tool like this. Even though it took some time to hash out the details, initial talks with the Cleveland Federation were really promising. They seemed to get the idea, the benefits and usefulness of having an app right away.
Whats so important about a mobile presence?

I think about the Internet of the 90s, when everyone scrambled to have a website. That same trend is happening now with going mobile, and its happening much faster than in the past. Its important for organizations, if they want to stay viable, to adopt a complete mobile strategy. And the ones that do will be able to stay relevant and thrive.

What was it like working with the Cleveland Federations leadership? We had talks with different groups within the organization throughout the whole process. Because the app was a pretty new idea, we had a bit of a challenge trying to explain its benefits to different groups in the organization. If we ever got stuck, we would regroup and bring in other people to help make it work… If there is one lesson learned its the importance of open communication from the beginning so that everyone understands what is happening.

What is Jewish CLE all about?

There are a couple layers to it. First is the news feature, which just gets information to people, and that is why I think its being downloaded all over the world. Second is the events piece, which has events from entire Jewish community, not just Federation events. That is an engagement piece that is really important. A lot of organizations in the community can benefit from the app, which should help to bridge all gaps in community. Another piece to the app is the call to action stuff. Were trying to direct people to different ways to get involved. Not just directing people to the Federation to donate. We are helping people learn more about the Federation, which helps to connect people and get them on the same page. If the end result is information or donations either way to us its awesome.

How are you evaluating or tracking the impact of the app?

There is not really a formal evaluation process on our end. Im sure the Cleveland Federation is tracking usage and downloads. We are looking for feedback from users from the Federation on how to improve it. But, measurement and evaluation is an interesting concept. Consider: do we look for ways to justify the printing of calendar, or of owning a phone system? No, that is just the basics of running a business. We have to get past the question of should we or shouldnt we? to the question of should we do it this way or that way?

So, readers: Have you downloaded the CLE app? Thoughts? This way or that way?

In January, Birthright Israel NEXT launched its first iPhoneapplication, Mila-4-Phone. The application (app), a Hebrew-learning program that uses flashcards and includes audio pronunciation, has been downloaded more than 3,000 times so far.

Such success signals the grand potential for Jewish organizations to use apps to reach their constituents in a new way: right in the palm of their hand.

Apps are what websites were to an organization ten years ago, Daniel Brenner, executive director of Birthright Israel NEXT, said. Back then, we used to joke “you are not real until you are virtual.”

Brenner makes a good point. In the web of the 1990s, websites were static and reference-focused. Today, the web is increasingly more fast-paced and social-focused thanks to the ubiquity of user generated content and the rise of social networking sites.

As apps bring the social web to phones and other mobile devices, organizations are pressed to deliver valued-added content that is more than just reference material.

Apps challenge organizations to show how ongoing, updated information from the organization is relevant to users, Brenner said.

For Birthright Israel NEXT, the key to compelling content was listening to its target base, a population that was expressing interest in returning to Israel and learning Hebrew.

We view the iPhone app as having two mission related functions one educational and one community building, Brenner said. One element of our mission is to deepen the connections that young adults have to Israel Hebrew learning certainly does just that.

But the real power of the app is that it is building a community of over three thousand young adults who share an interest in Hebrew language. Since we are involved in promoting ulpanim in ten cities and in holding ‘beit cafe’ events where Americans can meet Israeli peers and work on their Hebrew, the iPhone app serves as a magnet for folks with a shared interest and has encouraged people to meet others who want to learn Hebrew.

While the app may not be for every Birthright Israel alumni, it has attracted a large, focused following with more than 3,000 downloads from 49 countries.

Niche followings are the best type of followings, Brenner said. Knowing that over 3,000 young adults who are for the most part unaffiliated Jews and who did not go to Jewish day school all want to learn Hebrew is a very good thing.

Seeing a Jewish organization invest in a new technology and using it to reach its base in a 21st century model transcending space, time and place is definitely a very good thing.

So good that other Jewish organizations are taking notice. For instance, Mazon has an iPhone app as does the Cleveland Jewish Federation, which launched Jewish Cleveland in March.

Will apps be the new websites of the 2010s?Are you or your Jewish organization thinking about creating an app? Sound off in our comments.

Video of Mila-4-Phone in Action

To learn more about Mila-4-Phone check it out here.If you dont have an iPhone, or iPod touch, you can still join in on the mobile- Hebrew-learning fun with Birthright Israel NEXTs Hebrew Word-A-Day Text Messaging program. Just text Hebrew to 41411 to get started.