Darim is hosting a blog carnival (a series of posts from various guest bloggers on a topic) on "Connected Congregations".  The following post from Shel Holtz (originally published on his blog and shared here with persmission) as such profound implications for how synagogues can be supporting and connecting and empowering their community and individual members.

The bold human and emotional statement made clear in this story should inspire congregational leaders to reenvision not only how to use their Facebook pages, but how to be a positive organizing force in their communities.  I invite you to share reactions, ideas or your own examples in the comments.  What could this look like in a congregational setting?

For some time, hospitals have had Facebook pages, Twitter accounts and a host of other social channels. Like most other organizations, the hard-coded institutional mindset limits the uses to which hospitals put these networks. Upcoming events, health tips, medical news reports, staff spotlights and recognition characterize the usual hospital feeds.

As with other institutions, hospitals need to make outside-the-box thinking with their pages the new inside-the-box. You now have a channel to engage with people who find you interesting, important, relevant or useful. How can you take advantage of that?

Years ago, when I interviewed him for a newsletter article, User Interface Engineering founder and CEO Jared Spool told me that any technology could accomplish only three things. It can solve a problem, improve a process or let you do something that simply wasn’t possible before.

Where are the opportunities to problem solving, process improvement or innovation in a hospital Facebook page?

It took an artist-in-residence to come up with one answer at Seattle Children’s Hospital. John Blalock was making routine visits to the room of 16-year-old patient Maga Barzallo Sockemtickem, who had been stuck in the hospital for weeks for treatment of graft-versus-host disease, which appeared after her November 2011 bone marrow transplant for acute myeloid leukemia.

Along with all the other things Barzallo Sockemtickem missed about being at home, heer cat Merry topped the list. Merry was the subject of most of her conversations with Blalock, who has worked with other patients on photo and music video projects. He first asked other Children’s Hospital staffers for pictures of their cats, but it was the patient herself who pointed out that he could score a lot more photos with a request on the hospital’s Facebook page. The request asked for photos to be posted to the wall by July 25. 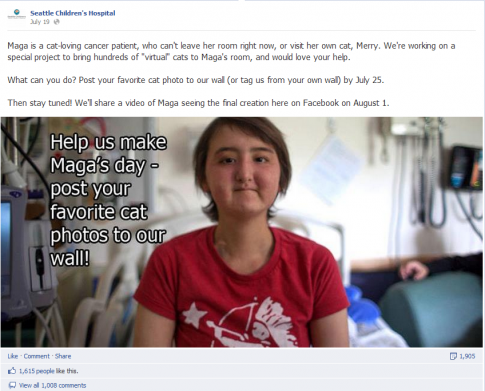 The post drew more than 1,000 comments, the vast majority of them accompanied by photos. Ultimately, more than 3,000 photos arrived, with snail-mail adding to those shared on Facebook.

On the day of the deadline, Blalock erected a tent of sheets over Barzallo Sockemtickem’s bed onto which he projected the images of the slideshow. A video of the virtual cat immersion chamber posted to YouTube has been viewed nearly 190,000 times.

The story is heartwarming. An NPR report quoted Barzallo Sockemtickem saying, “In the hospital, you feel cut off. You lose contact with regular people. So the photos made me feel like I was part of the world again.”

It’s a demonstration of the healing power of felines. Hospitals also should be scheming about how to use the palliative properties of art. “All hospitals are such a blank slate for doing art because you can take a medical experience and transform it,” Blalock said.

For communicators tasked with fueling a hospital’s social media efforts, the tale should also spark some thinking beyond the usual grist for the newsfeed mill. Artist-in-residence Blalock is already on to his next brainstorm for how to tap the power of the Net; he’s thinking about how to fuse Skype to a robot that will move among patients in the cancer ward, opening the outside world to them.

The simple Facebook request for photos no doubt did wonders for Seattle Children’s Hospital, since commenting and adding photos boosts a page’s Edgerank score like little else, getting the hospital’s updates onto the newsfeeds of people who have liked the page. The awareness of the story resulted in considerable news coverage; many of the web reports included the YouTube video, further expanding coverage. The YouTube video invites you to visit the Facebook page to see all the photos.

The thinking behind Blalock’s innovation did not begin with, “How can I use the hospital’s Facebook page,” or even, “Is this something I can use the Facebook page for?” It was rather Barzallo Sockemtickem’s recognition that expanding the search for photos to Facebook improved the process of soliciting hospital staff for their pictures.

That’s a mindset that has been outside the box for most hospitals. The more we can change the way we look at the social tools at our disposal, the more we’ll be able to apply them to problems, processes and innovations that can genuinely help people while shining a light on the compassionate care the hospital delivers.

This post is part of a blog series on Connected Congregations being curated by Darim Online in partnership with UJA Federation of New York.  Through this series, we are exploring what it means for synagogues to function as truly networked nonprofits. Connected Congregations focus on strengthening relationships, building community, and supporting self-organizing and organic leadership.  They are flatter and more nimble, measure their effectiveness in new and more nuanced ways, allocate their resources differently, and use technology in a seamless and integrated way to support their mission and goals.  We hope these posts will be the launching pad for important conversations in our community. Please comment on this post, and read and comment on others in the series to share your perspective, ideas, work and questions. Thanks to UJA Federation of New York for supporting this work.