The Community Building Internship at jU Chicago is premised on the idea that small communities are, as sociologist Jonathan Woocher has written, “a consistent source of meaning, a focal point for relationships, and a powerful contributor to a sense of self-worth.” By empowering a cohort of students to create small communities organized around a theme, activity, or shared interest, we are able to create the kind of specialized Jewish opportunities that have the power to engage more Jewish students on a deeper, more meaningful level. To date, our nine interns have created small communities around everything from cooking elaborate Shabbat dinners once a month, to weekly student-run Jewish yoga and meditative practice, to reinvigorating the traditional idea of a tisch.

The internship also draws heavily on network theory, as presented in the book Connected: The Surprising Power of Our Social Networks and How They Shape Our Lives by Nicholas Christakis and James Fowler. Christakis and Fowler argue that there are fundamental rules that govern the formation and operation of social networks, and that social networks must be tended to by individuals and organizations in order to function optimally. There is even a social structure which, they argue, can yield the best results in terms of human achievement: a series of loosely connected small communities, the members of which are more closely connected in discrete cliques, hubs or pods. By adopting this “pod” model in the Community Building Internship, our hope was to create a dynamic campus Jewish community from which Jewish innovations and achievements can and will arise.

But how can we, and the student interns, know if the communities they are creating look anything like the structure recommended by Christakis and Fowler? 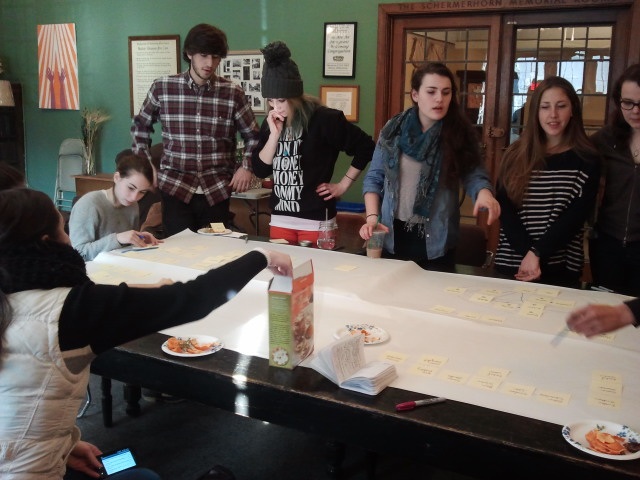 Enter a roll of butcher paper, post-its and some colored Sharpies: all the ingredients needed for a low-tech version of network mapping. First, the interns decided who they considered to be part of the core membership of their communities, and wrote those names on individual post-its.

Then, they arranged the post-its on the butcher paper so that their spatial placement was reflective of relationships between members–for example, if two people in the group were dating, or if they were close friends who came to meetings together, or roommates, then their post-its would be next to each other. 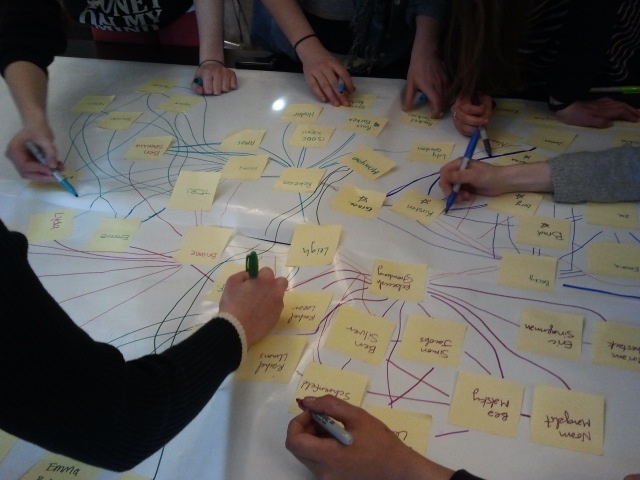 By creating a physical representation of the network of Jewish students at UChicago, the student interns were able to identify the people at the center of the network, participating in multiple small communities, who were functioning as “hubs” of Jewish life and activity. They were also able to see the people who were less-connected to others within the network and who therefore had more potential for involvement and collaboration. We learned that our small community initiatives actually did resemble the structure recommended by Fowler and Christakis. Less practically but more important for purposes of morale and enthusiasm, the student interns were able to get a sense of how their smaller efforts were adding up to an impressive constellation of students involved in Jewish communities across social networks and different pockets of campus life. 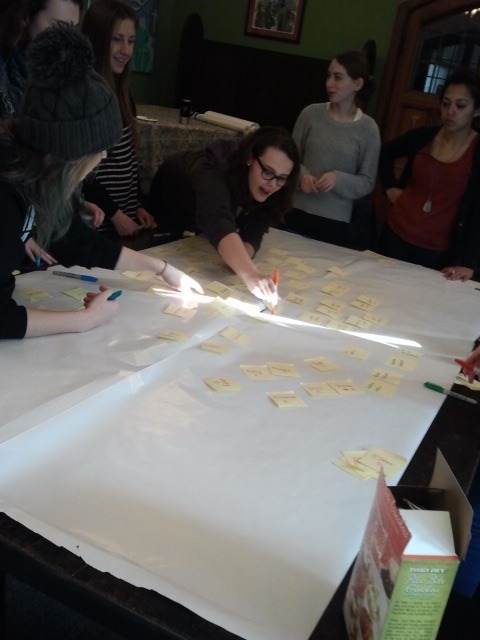 Lastly, the process of creating our network map was collaborative, iterative and fun. We plan to do it several more times throughout the length of the internship. Our prediction: as the people in our small communities forge connections with others in the overall network, these connections will create a density that will attract more and more students to the meaning, pleasure and fun of Jewish life at the University of Chicago.

Rachel Cort is the Director of Community-Building programs at jU Chicago, an organization that works with Jewish students at the University of Chicago. She is currently pursuing her Master's in Jewish Professional Studies at the Spertus Institute for Jewish Learning and Leadership.

In these dark days, we could all use a little extra light. Join @JClimateFest partner @JoinDayenu with @JTSVoice and @jdforward for the premiere of two new Jewish climate anthems from Rena Branson and @ZoTobi, & words from Rebecca Solnit on Thur night 🕎 http://dayenu.org/lightingtheway