During Open House season, schools are looking for ways to stand out among the crowd of institutions trying to reach prospective parents. Talking about a school’s “warm and nurturing community” and the “academic excellence” is only going to get the school so far.

So what else can schools do to rise above all the noise?

When we are faced with many choices, we often rely on word of mouth from friends in our social networks to help make our decisions. So it was clear to us at The Jewish Education Project that in order to promote the school in a unique way, we need to have the parents involved and we need to get the parents talking.

As Bonnie Raitt writes and sings, “Let’s give ‘em somethin’ to talk about.” Or in the 21st century version of this, let’s give parents something to Facebook about.

Parents who are part of the Parent to Parent (P2P) network have been learning about the power of social media to share their stories about Jewish day school education, and adding their voices through local parenting blogs and the Parent to Parent site. The challenge has been to keep them talking, especially during peak periods, such as open house season. Here’s where the campaign approach comes in.

The P2P campaign model organizes parents for a specific time period to talk about a value, an idea, an event – any focus point unique to the school that will help prospective parents get a better idea of what that school, and the community it fosters, is all about. 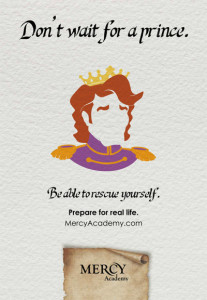 A very creative campaign can promote the school, without necessarily talking about academic excellence or the nurturing environment. Take for example a marketing campaign for Mercy Academy, an all-girls’ Catholic school in Louisville, Kentucky. In an article about the campaign, the writer explains “The campaign, created by Doe-Anderson, a Louisville-based advertising agency, is meant to reflect one of the school’s core goals: to help its students become independent, productive women in the real world.” And as you can see in the ad, they didn’t need to show science labs or innovative technology to get the message across.

The highly engaged and motivated parents of Mazel Day School (MDS) of Brooklyn were the brave pioneers who first experimented with this approach. When I asked the parents what they love about the school, most of them had a real, emotional reaction to the question and talked about the school’s successful approach to imparting positive values. They are extremely proud to see their children grown into mensches. 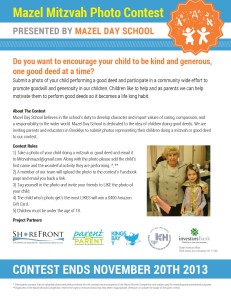 It was no surprise that they suggested a Photo Mitzvah Campaign promoting the value of the children doing good deeds by inviting parents in Brooklyn to submit pictures of their child doing a mitzvah or good deed. The Mazel parents wanted to reach parents from Jewish early childhood centers in the area, so they partnered with several of them on the campaign. The submitted photos were shared on Mazel Day School Facebook page. The photo with the most “Likes” on Facebook won a $400 Amazon Gift Card.

Mazel Day School parents gave out fliers in the early childhood centers, emailed their friends, sent Facebook messages and talked to other families. The parents now had something to talk about. 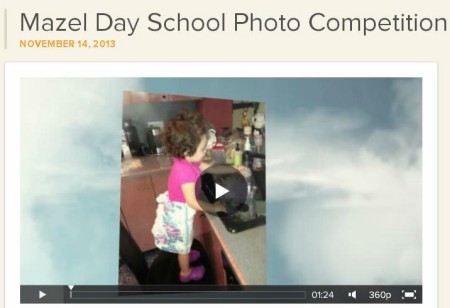 The campaign ran for five weeks and opened new doors for the school to reach prospective parents. For the first time, Mazel Day School officially partnered with early childhood centers in the area: KingsBay Y, JCH of Bensonhurst, and Shorefront Y. These new relationships can now be leveraged for other partnership opportunities and for reaching prospective parents. The campaign increased exposure of the school to the broader community. Mazel Day School Parents overheard parents who were not part of the school talking about the contest. The Mazel Facebook page experienced a significant boost during the competition period, including 50 news likes on the Facebook page. The last time they had so much traffic was when their school was destroyed during Hurricane Sandy; now the attention was due to a positive story that truly highlighted the school and the community. In their reflection about the implementation of the campaign, the Mazel parents wanted to organize a larger group of parents to lead and implement the campaign to reach an even larger audience of prospective parents.

At their upcoming open house, the school will ask prospective parents how they found out about the school. At this time, the Mazel parents will be able to evaluate more specifically the reach of their campaign and where they need to focus their future outreach efforts.

Action Steps: Running a P2P Campaign in Your School’s Community

Consider experimenting with this campaign approach to promote your school. Here’s how you can get started:

Best-selling author Seth Godin writes: “Stories are the way we navigate our world, our chance to make sense of who we are and what we do.[…] Nonprofits make change, and the way they do this is by letting us tell ourselves stories that nurture our best selves.” Creating a buzz and chatter around your school requires giving parents a great story to talk about. Day school parents are part of a movement committed to giving their children the greatest Jewish education possible. Let’s build that movement; let’s help parents get their stories out.

Parent to Parent is an initiative of The Jewish Education Project and is made possible by a grant from UJA-Federation of NY. Learn more about Parent to Parent on our website, blog, Facebook and follow us on Twitter. If you are a New York area day school and would like to get staff assistance to implement this project, contact Irene Lehrer Sandalow, Project Manager in the Day School Department of The Jewish Education Project at [email protected]

Important new research about engagement and lowering barriers to entry … during the pandemic and beyond.